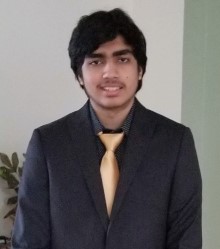 Why I decided to enroll at the University of Maryland:  I enrolled at the University of Maryland for multiple reasons. In my high school, UMD was a highly regarded university, especially in the field of engineering. I wanted to attend an academically challenging and rewarding college while staying within my home state. In my research, I was impressed by the resources and opportunities the university offered. Additionally, UMD was recommended to me by my older brother who is currently in his senior year here.

Why I chose engineering:  Ever since middle school I had an interest in engineering. I think part of the pull to me was that engineering was an intersection of both academic subjects and recreational activities like building Legos and robotics. My father was an electrical engineer and encouraged me to pursue an education in the field. Electrical engineering is a broad major, which appealed to me because I am still learning what specific aspects of engineering interest me most. Additionally, electrical engineering contains many components of computer science, one of my other favorite subjects.

Activities I do outside of class:  In high school I participated in Future Business Leaders of America (FBLA) and in the It’s Academic Club. FBLA is a club which teaches students elements of entrepreneurship through projects and engaging conferences. It's Academic Club is a trivia competition in which groups of students race to answer questions from all fields of academia, much like Jeopardy. Outside of school, I am a member of the nonprofit MathTrekz, in which I tutor students in mathematics.

Honors and awards I have received at Maryland:  Other than this scholarship, I was awarded the President's Scholarship for four years. I was also accepted into the UMD Honors College; specifically the Gemstone Living and Learning Program.

After graduation, I plan to:  My plan after graduation is to attend graduate school and get a master's in an engineering field. Additionally, I have considered also studying to get an MBA, to contribute to my more long-term goals. Eventually, I want to use my engineering and entrepreneurship expertise to create my own business.

I am a freshman student in the A. James Clark School of Engineering at the University of Maryland. This letter is to thank you for you generous support of the Long Nguyen and Kimmy Duong Scholarship which I have been awarded and will be using towards my college education.

In high school I participated in Future Business Leaders of America and in the It 's Academic Club. Outside of school , I am a member of the nonprofit MathTrekz , in which I tutor students in mathematics . My major at UMD is electrical engineering and after graduation I plan to get a master 's in a field of engineering. I am also in the Gemstone Honors Program.

Thank you again for this scholarship award. Your contribution to my academic success is much appreciated.